I’ve been trying to make the job options screen better in system-config-printer. The original screen is not particularly friendly: just a list of tersely-named options like “cpi” with no explanation of what they are for or how they work. I spent some of Friday prototyping a new idea for the screen: instead of only listing the options that have been set, we should list the common options that people would like to set, with similar options grouped into sections.

Here is what the old screen looked like, taken from a screenshot on Fedora Core 6: 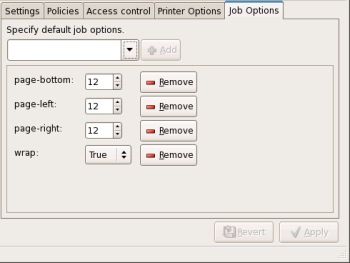 The idea in re-working it was to make it easier to find (for example) the ‘cpi’ option when wanting to change the size of text print-outs, and to generally make the whole thing friendlier. Another reason for wanting to re-work this screen was to avoid the need to fetch the printers.conf file when finding out which options are set. At Mike Sweet’s suggestion I decided to try just putting in all the known options and having “Reset” buttons, instead of only listing the options that have been set.

Here is a screenshot of a prototype of the re-worked version: 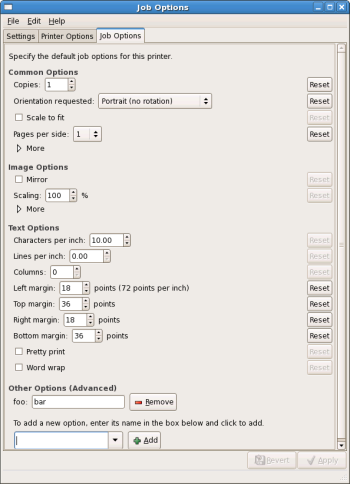